This map shows the East End of London, in 1922, the year my father, Mojzesz Silbernadel and his brother, Zelig Zylbernadel, arrived in London. They arrived on the doorstep of their father, Jacob, who had been living in London for about 10 years already, while they were growing up in Warsaw. They were 12 and 16 years old.

Jacob was living in Mount Street, opposite the Royal London Hospital and in 1918, he had married Fanny Cohen, from Sidney Street, nearby, at the Philpot Street Synagogue.
The two kids fended for themselves, until 1930, when my father was 20. He married Annie Kirshenberg, from Chicksand Street, when he was living in Pelham Street, which no longer exists. 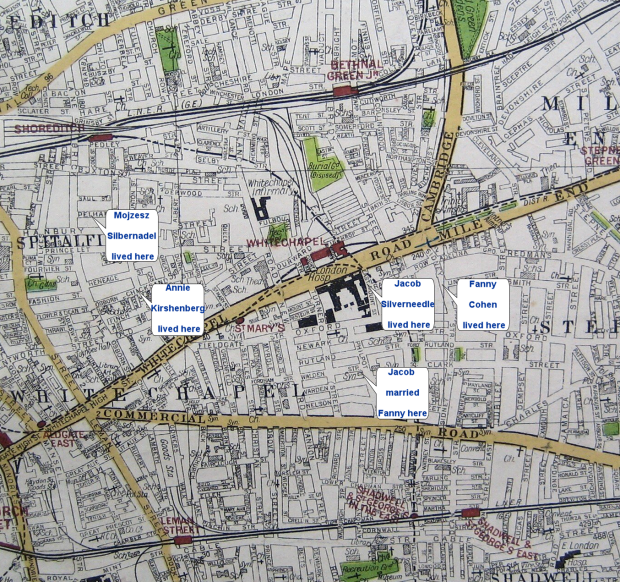 See: Full map
N.B. The Blind Beggar pub, which became famous, in the 1960s, for being the hangout of the notorious gangsters, the Kray twins, was situated at the junction of the Cambridge Heath Road and the point where Whitechapel Road becomes the Mile End Road (where there is a number 345, on the map).